The hotly anticipated video game Red Dead Redemption 2 was released on Friday the 26th, and to celebrate Radio Verulam have some great merchandise up for grabs courtesy of Rockstar Games!

From the creators of Grand Theft Auto V, Red Dead Redemption 2 is the studio’s first release since 2013 and has been eight years in the making. Set in the Wild West at the end of the 19th century, play as Arthur Morgan as you rob, steal and fight your way through the town of Blackwater, with federal agents and the best bounty hunters in the nation on your trail.

Available on Playstation 4 and Xbox One, the game has the largest, most immersive and detailed world in video game history, and if you’re one of the millions around the world waiting to add the game to your collection, all you need to do enter for a chance to win a Red Dead Redemption 2 merchandise pack containing a t-shirt, key ring, mug and lots of other great goodies. 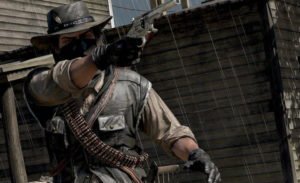 The winner will be chosen at random from all correct entries received by the competition closing time.

The competition will end at Midnight on Sunday November 4th. Please be aware that the game will not be included in the prize.